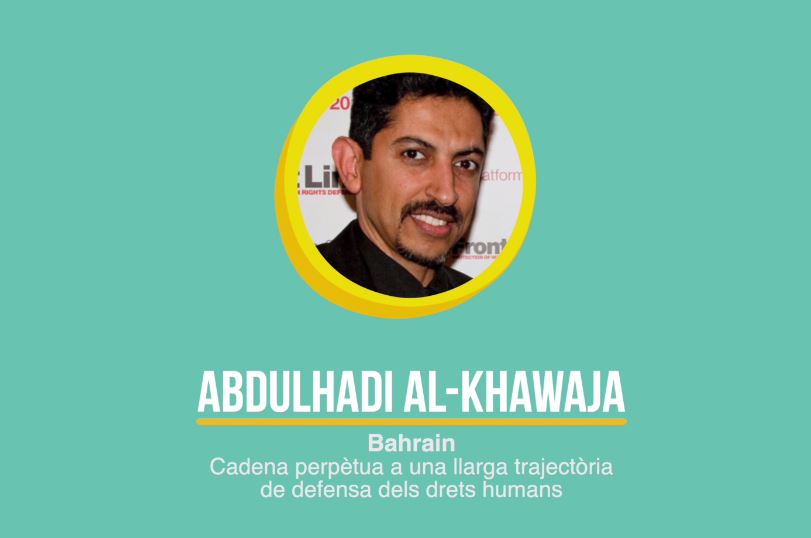 Abdulhadi Al-Khawaja is a historically renowned human rights activist in Bahrain, who kickstarted the Human Rights Center of Bahrain (BCHR) and the Gulf Center of Human Rights (GCHR). After two decades abroad (since 1991, with his political asylum in Denmark) he returned to Bahrain when, with the coming to power of Hamad bin Issa Al Khalifa, a period of reform seemed to be on the horizon. Nevertheless, as years passed, the political unwillingness to change towards a more democratic society became clear.

In 2011, Al-Khawaja participated in the protests which marked the arrival of the Arab Spring in Bahrain. Shortly after that, he was violently detained and condemned to a life sentence by a military tribunal. In prison, he has been gravely tortured and mistreated. He has undergone several hunger strikes to protest against the abusive conditions under which he finds himself.

The attempt to silence Abdulhadi Al-Khawaja reflects a systematic pattern of repression against any dissidence or protest. As Human Rights Watch, denounces, authorities have prohibited the functioning of any media outlet in the country. They have also dissolved every opposition group while they continue to detain and to condemn activists and journalists. The recent death of Prime Minister Khalifa bin Salman Al Khalifa, who has governed for the last five decades, does not create much hope for change.

In this context, the project Cities Defending Human Rights has started a campaign to collect signatures to raise the following demands to the Kingdom of Bahrain:

Support the petition for the freedom of Abdulhadi Al-Khawaja:

Share your support on social media platforms with the hashtags #CDDHLliures, #FreeAlkhawaja and #Bahrain!

Need more information? You can consult the following link:

Cities Defending Human Rights is a project coordinated by the Catalan Fund for Development Cooperation and managed by the Catalan Commission for Refugees with the participation of 27 city councils and 9  Catalan organizations and institutions involved in the defense and promotion of human rights locally and globally. Currently, it is launching multiple campaigns to demand the freedom for various Human Rights defenders around the world, in which the case of  Abdulhadi Al-Khawaja is included Maryam Al-Khawaja,Abdulhadi’s daughter, participated in the 2015 edition of this project.