Defenders of the Guapinol Waters (Honduras) 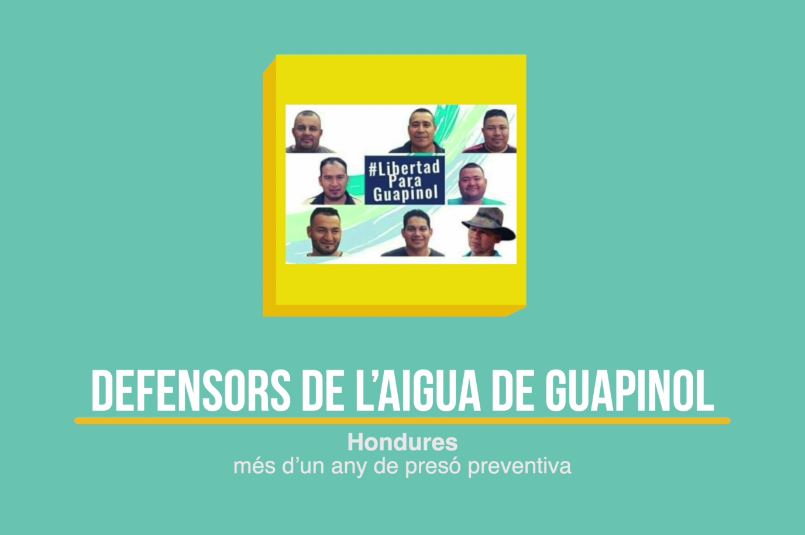 Defenders of the Guapinol Waters: Over a year in pre-trial detention.

Their names are Porfirio Sorto Cedillo, José Avelino Cedillo, Orbin Naún Hernández, Kelvin Alejandro Romero, Arnold Javier Alemán, Ever Alexander Cedillo, Daniel Márquez and Jeremías Martínez Díaz. They are environmental activists, who are also members of the Municipal Committee of the Defense of Common and Public Goods in Tocoa (CMDBCP in Spanish) in Honduras.

These activists have been opposing the commissioning of an iron oxide mine in the “Montaña de Botaderos Carlos Escaleras” National Park, previously known as Montaña de Botaderos (Which translates to Botaderos Mountain). The 8 activists find themselves in pre-trial detention for over a year now, under the presumed charges of aggravated arson and unjust deprivation of liberty.

This mining project, which is opposed by the CMDBCP, is driven by Inversiones los Pinares (Investment group commissioning the making of the mine), formerly known as Emco Mining. Its located in a protected area since 2011, and said area was shrunk in order to accommodate Emco Mining’s project.

The activists fear that the commission of this mine can gravely affect its immediate environment and the rivers around it, specifically the San Pedro and Guapinol river. In 2018, after Inversiones Los Pinares started the constructions of a highway to access “Montaña de Botaderos Carlos Escaleras” National Park, the waters of the Guapinol river became muddy, and it was no longer available for the use of the Guapinol community. In August of that year, a camp was set up to block the aforementioned highway, which was violently cleared by authorities. The charges presented against the eight imprisoned activists as well as other members of the CMDBCP are related to incidents that occurred during the timeframe in which the camp was being set on the highway.

According to the CMDBCP, the Honduran penal code does not provide preventive detention for the crimes of which the eight defenders deprived of liberty are accused. In this sense, the organization denounces a “clear violation of due process”, consolidated in the December 18th hearing, in which, again, the activists’ request for freedom was denied. The CMDBCP explains that, within the framework of the entire process, the Public Ministry and the judiciary have positioned themselves in favour of the mining company and have enabled the criminalization of the activists, both the eight who are imprisoned and the other five leaders on whom an indictment has been received but not confirmed. For these reasons, they are considered politically persecuted.

The accusations of the defendants of the Guapinol waters highlights a generalized pattern of criminalization, violence, and repression against environmental activists in Honduras. The murder of Berta Cáceres is one of the most renowned cases. The Carlos Escaleras National Park is named after another activist killed in the 90s, who was also a defender of the land and was opposed to a African palm project in the same territory in which CMDBCP fights now.

While issues in the region have dragged on for decades, environmental conflicts in Honduras have worsened since the coup d’etat in 2009, which dismissed the then president, Manuel Zelaya, from his post.

Ciudades Defensoras de los Derechos Humanos (Which translates to Cities who Defend Human Rights) has started a signature collection campaign, in which they demand from the Honduran Government the following:

Share your support on social media platforms with the hashtags #CDDHLliures y #GuapinolResiste!

Need more information? You can consult the following link:

Cities Defending Human Rights is a project coordinated by the Catalan Fund for Development Cooperation and managed by the Catalan Commission for Refugees with the participation of 27 city councils and 9  Catalan organizations and institutions involved in the defense and promotion of human rights locally and globally. Currently, it is launching multiple campaigns to request the liberty of Human Rights defenders around the world, amongst which the Guapinol waters defenders.

The project echoes the situation that Honduran environmental defenders have been going through, as Margarita Pineda explained when she participated in the project in 2018.