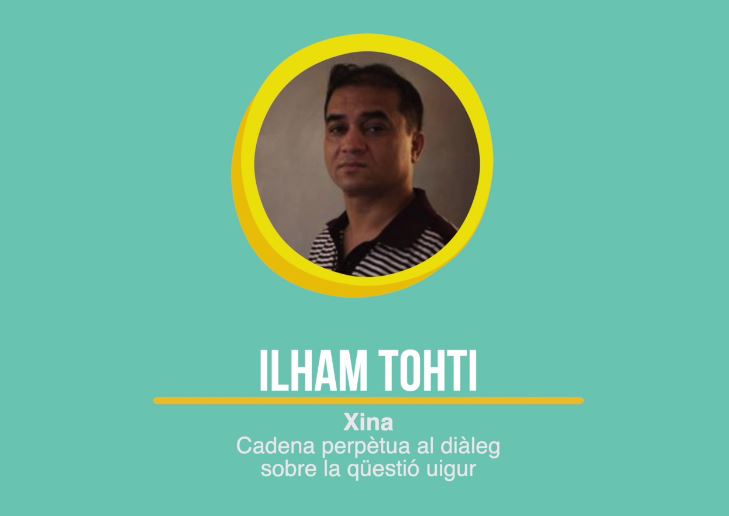 Ilham Tohti: life sentence to the dialogue on the Uyghur issue.

Ilham Tohti is an Uyghur economist and intellectual. Originally born in Artux, in the Autonomous Region of Uyghur in Xinjiang, at 16 he moved to Pekin. Tohti has worked intensely to promote the human rights of the Uyghur minority, and to open a safe space for dialogue with the han community, which constitutes the vast majority in the Popular China Republic. After years of suffering intense repression with  detentions and periods of house arrest, in 2015 he was condemned to life in prison under accusations of separatism, an idea with which he had never identified.

As a consequence, a sophisticated and intrusive vigilance system and police repression has been applied in Xinjiang. Researchers estimate that around one million people of ethnic Uyghur descent are detained in camps of mass internment and indoctrination, which are wrongfully called “professional training camps”. In the words of Ilham Tohti’s daughter, Jewher Ilham, “Being Uyghur nowadays means not being able to contact at least one member of your family”.

In this context, the project Cities Defending Human Rights has started a campaign to collect signatures to raise the following demands to the government of the Chinese Popular Republic:

Share your support on social media platforms with the hashtags #CDDHLliures and #FreeTohti!

Need more information? You can consult the following links:

Cities Defending Human Rights is a project coordinated by the Catalan Fund for Development Cooperation and managed by the Catalan Commission for Refugees with the participation of 27 city councils and 9  Catalan organizations and institutions involved in the defense and promotion of human rights locally and globally. Currently, it is launching multiple campaigns to demand the freedom of various Human Rights defenders around the world, amongst which  Ilham Tohti. In 2016, Cities Defending Human Rights echoed the situation that the Uyghur people are suffering through the participation of the activist Rebiya Kadeer.

Do you want to support other activists who have been unjustly deprived of their liberty? Learn about their stories and sign their petitions