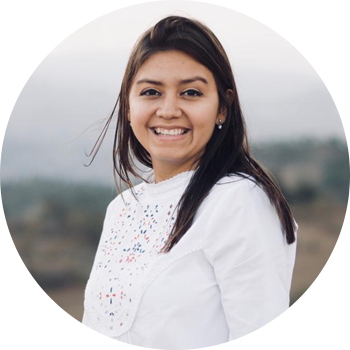 The Feminist Collective, a point of reference in the struggle of the women of El Salvador, celebrated its 15th year of service in 2019. This milestone is a result of an important collective effort to put women’s rights on the Salvadoran political and institutional agenda, as well as to strengthen the capacity of women in order to transform the power relations that led them to a subordinate position in respect to men. Salvadoran activist Amanda Quijano has been participating in this collective effort since 2013.

Having graduated in International Relations from the University of El Salvador and holding a Master’s Degree in Local Development, Quijano is part of the Feminist Collective’s San Salvador team. She coordinates issues related to youth and sexual and reproductive rights.

Her work is also closely linked to municipalism and she works on incorporating the gender perspective into public policies through local administration. She is also a volunteer of La Radio de Todas, an online radio that was created as a place of expression for women and young people in different sectors. “It is an awareness and training tool that, in an emerging way, helps to create feminist media,” explains the activist.

In addition, Quijano is also a consultant for different national and international organizations, especially in matters related to the collective and individual rights of women, adolescents and girls. She has taught several workshops, both for young people and adults, and has participated in various social studies on issues related to feminism and the rights of women.

> What roles do the cities of El Salvador play in defending human rights and, in particular, women’s rights?

In 2006 there was a reform of the municipal code that introduced new measures for municipal governments: to promote actions that strengthen gender equity through a Municipal Women’s Unit (UMM). This defines a clear mandate for municipalities to work in defense of women’s rights.
This legal recognition is a result of more than 10 years of impact and work of feminist organizations. Currently, 87% of municipalities have UMM. However, this does not guarantee consistent work for the rights of women, especially when it comes to overcoming inequalities between men and women. In many municipalities there is more of a welfare approach, aimed at women in more vulnerable situations and linked to the generation of income and attention to violence. In addition, not all UMMs have the budget to carry out positive actions. Even so, the fact that the municipal governments know about the situations and problems these women are experiencing, this is an important step forward.

> In November, the Feminist Collective signed a collaboration agreement with the mayor of San Salvador.

The objective of the agreement is to create and strengthen mechanisms that institutionalize gender equity in the mayor’s office. To achieve this, four lines of action have been defined: first, the management of technical and financial resources in order to promote positive actions; second, strengthening of gender equity capacities through training and technical advice on three levels (municipal council, technical staff and administrative personnel); third, the transversalization of the gender equity approach in various areas of the mayor’s office; and finally, the creation of specialized legal and psychological care spaces for women who suffer from violence.

> As of now, what are the main objectives of the Feminist Collective?

We have prioritized seven strategic areas: attention, prevention and eradication of violence against women (program for a life free of violence and public safety); municipalism and democratic governance (advice for local governments on development of equity instruments); the defense of sexual and reproductive rights; environmental justice with a feminist perspective; the integral protection of human rights defenders; empowerment and economic autonomy of women; and civic and political participation for equality.

> Since it was founded, the Collective has achieved several victories. What would you highlight?

One of the accomplishments was building a collective management that is recreated daily among the colleagues that form this team. It has also been important to work with all local governments regardless of the political party that is in power, advising on the development and monitoring of public policies on gender equity. In addition, strategies have been promoted for the defense of women’s rights coupled with the realities and particularities of the territories.

Despite the efforts of the Ministry of Education to elaborate documents addressed to the entire educational community on comprehensive sexual education, this has only been put into practice as a pilot test and carried out by civil society organizations. From the government there is no sex education that is institutionalized and directed to adolescents or young people.

> The total prohibition of abortion in El Salvador has popularized the expression “from hospital to jail”. What is the situation of women who get an abortion and end up in jail?

At this moment* there are 23 women who are in prison for this reason, 21 convicted and two awaiting sentencing. The situation in prisons is very difficult. To begin, prisons are overcrowded. For example, Ilopango prison is designed for 400 people, and there are more than 2,000. There is a significant lack of services, such as water, which generates inhumane conditions. In addition, the stigmatization surrounding abortion means that when women enter the premises, other inmates harass and marginalize them, because they have allegedly committed a crime contrary to the mandate of motherhood.

Women feel that they are convicted of a crime they have not committed, and that generates a feeling of helplessness. The situation of poverty from which they come also means that in many cases their families cannot visit them nor can they provide them with the basic products such as soap, shampoo or menstrual pads, which the penitentiary system does not guarantee. Many of them have children from whom they are separated for long periods of time, for 20 or 30 years; the links are broken and this doesn’t only affect women, but also boys and girls.

> The elections this February have confirmed a change in the tone of the Salvadoran government. What do you expect from this?

To begin, the continuation of the programs that have been promoted in defense of women’s rights. In addition, during the campaign [the new president, Nayib Bukele], was in favor of the decriminalization of abortion when the life of a woman is in danger and was against the criminalization of women. I hope that this will generate a substantial change in the lives of women. I also believe that institutional mechanisms will have to be strengthened to guarantee the rights of women and LGTBI people.

* This interview was conducted during the first half of February 2019.