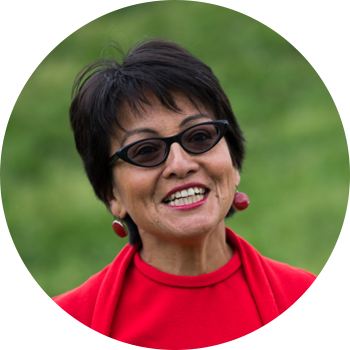 Edda Pando studied Communication Sciences at the University of Lima when, in 1990, the government of Alberto Fujimori promoted a series of economic measures known as the ‘paquetazo’. This caused a sharp increase in the price of university fees and Pando had to drop her studies. One day, her father offered her a ticket to go to Italy. “I did not think twice, not so much for the money but for the curiosity of seeing other places,” explains the activist.

She arrived to Italy in April of 1991, and three months later discovered that she could no longer legally stay in the country. She decided to stay either way, and began to work cleaning houses. In June she met political groups related to those who visited Peru, and she reassumed her political affiliation. Three years later, in 1994, she was legalized.

Almost a decade after arriving to Italy, she felt the need to focus her activism on the issue of immigration. In 2001, with some help, she founded the “Associazione Todo Cambia,” of which she is currently the president. Todo Cambia is an entity formed by people living in Milan, immigrant or not, who fight against racism and for the rights of migrants. From Todo Cambia, a demand for a Migrant University emerged, which celebrated its commencement in 2007 and was established as an autonomous association in 2012.
Todo Cambia is integrated into a large federation of entities in Italy, called ARCI, within which Pando has also worked several positions.

She has worked both at the state coordination level as well as on the Milan section. At the same time, Todo Cambia is also a part of the Milano Senza Frontiere network, an informal network of associations organized by the March for the Newly Disappeared. The activism conveyed through all these platforms has led Pando to get involved in a new project, Missing at the Borders, which exposes the stories of disappeared people on the European borders through the stories of their relatives.

In 2014, more than two decades after arriving to Italy, Pando was able to graduate in Linguistic and Cultural Mediation Sciences, with a thesis on the families of people who disappeared during the migratory journey from Tunisia to Europe. Shortly after, she founded the group Va de Bolero, in which she rediscovered singing. “The fact that I returned to singing has been the biggest aid in reuniting my two lives: that of the young university student, passionate about music, and that of the migrant in Italy, an activist for the rights of migrants,” she explains. In 2016 she headed the Milano in Comune ballot for the Municipality 2 of Milan as an independent, and until this day she continues to collaborate with them.
Pando is often posed a question whether she feels more Peruvian or more Italian. And she does not hesitate to answer: “I have two cities, Lima, where I was born and raised, and Milan, where I have become an adult woman.”

> How has the phenomenon of irregular migration in Italy changed since you arrived in the early 1990s?

Since the 90s there has been a constant flow of irregular migration, since the only mechanism to legally enter the country is what is called a “decree of the flow of migrants.” It is a regulation that the government approves every year and that defines the number of migrants that can enter Italy. It foresees that a person offering work can contact a person who is in their country of origin, in order to work in Italy. It is not understood how these two people know each other, and this is the first problem of the method, which is unrealistic. The second is that the expected quota has always been very low (between twenty and thirty thousand people).

The reality was different. Every year at least half a million migrants entered. Very few were regularized with this decree, purporting that they were in their own countries. Most of us have regularized with what are called sanatoriums. They are special decrees that allow the regularization of foreigners already present in Italy and that the government has approved in the years of 1989, 1995, 1998, 2002, 2009 and 2012. Since 2012, the situation has worsened a lot because there have been no more sanatoriums, and people have been forced to request international protection. There is no other possibility to regularize one’s situation. Many times people who want to regularize their workers come to us for legal information and we have to tell them that the law does not allow it. It’s a surreal situation!

> You affirm that migrations question everything.

Migrations are putting everything in discussion, especially because they question the existing social order -­‐ that of nation states. Before the states guaranteed rights to their citizens, but now the ones that demand their rights in a state are the ones that are not citizens. We demand rights as human beings, and therefore the idea of citizenship must be rethought. This must be done by states but also by the migrants themselves. Many times, when we organized protests, some migrants told us that we could not demand rights, that we were not citizens of this country, that we were guests. This led to very interesting discussions about what entitles one to rights. It should not be nationality or citizenship, but the condition of being human. Therefore, the idea of social organization has to change (for example, the citizenship of residence has been talked about), and it needs to change the mentality of the people who relate rights to nationality.

> Since the beginning of your activism in favor of migrants, it has been fundamental for you to give a voice to the protagonists of the migratory phenomenon.

Often European “experts” in migration believe they have the right to speak on our behalf.

But the colonizing-­‐colonized mentality does not disappear just because a person is antiracist.
In 2001 there was a process of the Social Forum in Italy, and a national immigration board was created. Migrants from different cities participated, but the Italians had very little regard for their presence. The meetings seemed to be only between them, and they did not even consider the use of the language. The migrants did not speak. After a few months, the migrants who came from different cities got to know and share opinions. We all lived this feeling of exclusion. Thus, one day we decided to create the Committee of Immigrants of Italy, in which only migrants could participate. When we communicated this decision to the Italians of the National Committee they labeled us as racists and separatists. But we needed an environment that allowed us to build our own subjectivity, as in the case of women’s movements, black or indigenous movements.

> How was that experience?

At the first committee meeting there were 50 people, all migrants. For the first time, I saw people who had not spoken at the table meetings. An African colleague asked for the floor and said, “I do not speak Italian well.” We all laughed and said, “Nobody speaks it well here.” Another colleague said, “I’ll translate what you say.” In the beginning, the committee consisted of only two women, an Albanian colleague and me. It was another difficult element: sexism exists in European movements and the movement of migrants.
Why do I support this process and still think that it is essential to favor the protagonism of migrants? Because the colonizing mentality of Europeans, of feeling entitled to speak on behalf of migrants, is added to the colonized mentality of migrants, who think that Europeans are better because unfortunately this is what they have taught us in our countries. We also struggled with ourselves, to not only be the ones who tell their story, but to learn and to be able to theorize about migration from our own migratory experiences. The committee lasted about five years. It was one of the most important experiences in which I participated. Later, political differences were manifested, because being a migrant does not constitute any guarantee of homogeneous thinking. Sometimes, people are surprised that some migrants vote for politicians who have racist positions. There is nothing strange about that: being a migrant does not mean being automatically anti-­‐racist.