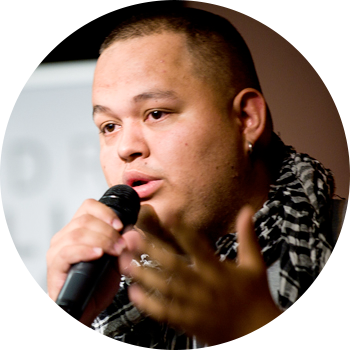 Jeihhco is activist for peace, coexistence, and non-violence in Medellín communes, where a large part of the population are families displaced by armed conflict. He promotes, through hip-hop, the recovery of memory, dignity and working with young people to offer them life options, no longer with armed violence still so present in these neighborhoods.

“Jei” from Jeison, “hh” from hip-hop, “co” from Colombia. These are the three areas through which the activist Jeison Castaño has built his artistic identity. Born in the “Comuna 13” in Medellín, Jeihhco lived the childhood and adolescence in a territory where the street was the center of life, but also, occasionally, the battlefield of the Colombian armed conflict. He met hip-hop in 1996 when he was 11 years old, but it was not until 2002 that he realized the transformer potential that had the music that made him vibrate. As he explains, it was then when he moved from “do” hip-hop “to be” hip-hop.

He sees the art and culture as purposes in themselves, but also as tools that cannot break away from work and social transformation. Her career clearly reflects this philosophy. He has participated in the design and implementation of numerous projects, including the hip-hop network “La Élite”, the “Revolución sin muertos” festival and, more recently, the “Casa Kolacho”. At present, he is a cultural manager in the “Comuna 13” and joins the rap group C15. Jeihhco usually uses words that may seem over-used, as “peace” or “love.” It does it not complexed and he is convinced that they are the key to build the future. In one arm, he has tattooed the word “passion”. In the other, the profile of his house: the “Comuna 13”.