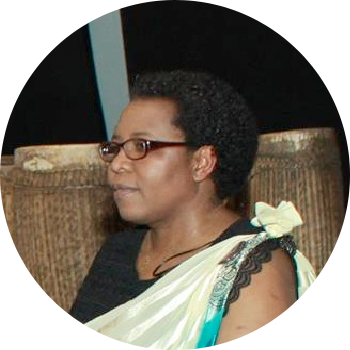 Marcelline Nyiranduwamungu is fighting for peace, democracy and freedom of expression in the hope that one day it will reach the Great Lakes region. She has lived in Belgium, together with her husband and 4 children, since 1996. The European country welcomed her as a refugee from the Rwandan war and in 2001 she was granted citizenship.

She is a co-founder of the International Network of Women for Democracy and Peace (RifDP), which is an organization that works to promote democracy and peace in Africa, especially in the Great Lakes region.

In 2011, following the imprisonment of Victoire Ingabire, the main leader of the Rwandan political opposition, the RifDP created the “Victoire Ingabire for Democracy and Peace Award”. It is presented every year on International Women’s Rights Day to people working for the defence of human rights, especially in the Great Lakes Region. The award is named after the woman who returned to Rwanda, after 16 years in exile, to run as a presidential candidate. She is now threatened by the government of President Paul Kagame and the network is working to publicize this case of repression.

The RifDP is a non-governmental organization that operates in three countries, Belgium, the Netherlands and Canada, and it is currently opening headquarters in France. They work for the defence of African women’s rights and to promote the role of women in conflict resolution. The organisation also aims to strengthen women’s leadership in the field of human rights advocacy. The RifDP is made up mostly of the African diaspora, and it also deals with issues arising from forced migration.

The main goal of Marcelline Nyiranduwamungu and the RifDP is a Rwanda where human rights are not violated, with democracy, peace and freedom of expression.

> What was the main motivation for creating the network?

The International Network of Women for Democracy and Peace (RifDP) emerged just after a conference that was held in Barcelona in 2008 on inter-Rwandan dialogue and the role of women. After the session we began to consider what we could do as women, bearing in mind that we are the first victims of the unjust wars that are fought around the world, and that the consequences of extremist, dictatorial and bloodthirsty regimes affect women and children first and foremost. We concluded that if we want to end this repetitive violence and promote consultation and dialogue in conflict resolution and in the promotion of human rights, women should be more active and take their place in decision-making bodies in order to make their voices heard. And we are doing this, little by little, especially after the creation of the network.

Yes, it is. Victoire decided to leave the Netherlands and return to Rwanda to run as a presidential candidate. That was the goal. In April 2009 she quit her job in Europe to pursue a political career and prepared the return to her homeland. She knew she would probably go to jail just for stepping in the country or that she would be killed, maybe even tortured, but she still wanted to go one step further and help rebuild her country as the leader of her political party. She spent eight years in prison and now remains confined to Rwanda, where Kizito Mihigo (an artist who wrote a critical song about the regime) and more and more of our friends are murdered or imprisoned by the Kagame government. She is now out of jail, but cannot move freely. She must report to the Rwandan Bureau of Investigation every month and she cannot travel without the permission of the Minister of Justice. Victoire is harassed every day, and anyone who gets close to her either disappears or is killed.

She left Europe to go to Rwanda in 2010. She was not a refugee in the Netherlands, as she arrived there with a scholarship one or two years before the genocide. The tragic events of 1994 found her there. Refugees who headed to Holland found a helping hand in Victoire. Thanks to the many associations she belonged to, she was able to help newcomers settle in countries where they did not speak the language. She helped them deal with paperwork and helped them find refuge, schooling, and employment. She travelled extensively in Europe and North America to learn about the situation of Rwandan refugees and helped them whenever she could. In her honour and in honour of her work. Every year we award the prize that bears her name to people who dedicate their lives to defending human rights in Rwanda.

> What are the latest allegations you have made about the lack of freedoms in Rwanda?

Last year, for example, soldiers took advantage of the pandemic and the restrictions on mobility in order to kidnap women and rape them if they saw them outside their homes during the curfew. We reported it. We wrote to the women’s section of the United Nations and to the women in our country’s parliament and we asked them what they were doing for those women who were being kidnapped by the soldiers. Rwanda has a higher percentage of women in Parliament than any other country in the world, but we never received an answer. As it is a dictatorship we got no response, but we know they received our message.

> Has there been a response from the international community?

These are the situations that we are trying to explain to the United Nations, the European Union, the Belgian government and the African Union so that they take action. We have taken very small steps, but we remain firm in the defence of peace and democracy.

We have decided to speak out without fear. I can do that from here, because I am outside the country. We want peace, democracy and freedom in the Great Lakes region and we want the international community to help us make it clear that freedom of expression is not a crime. Our government does not understand that the more a plurality of ideas coexists, the better our societies we will be. If people are not allowed to talk and express themselves there could be another catastrophe.

Rwanda has been part of the Commonwealth since 2009, even though it was never a British colony. The country is scheduled to host a meeting with the heads of government of this British organization in 2021. Our organization is preparing documents and initiatives in order to put pressure on the members of the Commonwealth and to reveal the flagrant violations of rights that occur in the country and the need to move towards peace and democracy.