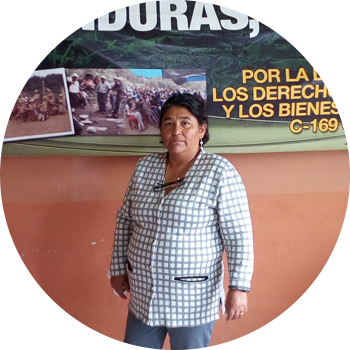 Margarita Pineda is a Honduran activist from the lenca community. She is from Marcala but lives in San José, both in the department of La Paz.

Her involvement in social movements started in the 80s, after the coup d’état against Manual Zelaya’s government in 2009 and the irregular handing of rivers and land from their territory to mining companies and hydroelectric projects. In answer to this the Movimiento Indígena Lenca Independiente de La Paz (MILPAH) was born. Pineda took part of the foundation of this organisation of which she is currently the secretary.

Since MILPAH started, the activist has reported the lack of previous, free and informed consultations in relation to the projects that will have an impact on their territory as it is established by the Convention No. 169 from the International Labour Organisation (ILO).

For three and a half years Pineda has been a member of the Comisión Ciudadana de Transparencia in the municipality of San José. Her participation in this institution ended last March and she is now a member of the Women’s Committee in the Red Sociedad Civil (RSC) a local space for the coordination of the various community actors.

One year ago, the women members of the MILPAH founded a new organisation: MURILPAH Mujeres Referentes Indígenes Lencas de La Paz (The Lenca Indigenous Women’s Group of La Paz). Their aim is to open up more spaces for the active participation of women. They believe that if we as a society do not learn to value the resources offered by ecosystems, if we do not face the need to properly manage natural resources, together with the fact that we live on a planet with finite resources, then we will be faced with an ever-more serious crisis – one which we might denominate as sanitary, climatic or migratory, but whose common element is that of a systemic problem.

> What is the main task of MURILPAH?

Our work focuses on defending the region and the common assets covered by ILO Convention 169. The struggle is a highly unequal one, as currently the three spheres of government have been taken over by a dictatorial regime that violates the rights of the people. We have returned to the decade of the 1980s.

Our demands seek the repeal of those laws that allow the construction of hydroelectric plants and the extraction of wood to be repealed, and to do this we are also expanding our social base from San José. We are carrying out training tasks, educating people in national law, as well as in both national and international decrees. We have also been looking into legal support strategies, as movement has been limited during the pandemic and we cannot go into the streets to protest. We have also been restricted in terms of meeting times and by the number of people who can gather together. This isolation complicates the work of raising public awareness.

We continue to believe that under Convention 169 we can fight for the defence of our lands against hydroelectric power companies and against the new production policies of the government that are expanding agricultural incursions and deforesting our region.

> Have you had to change any of your strategies?

Yes. These days we no longer go out on the streets so much and we are focusing on legal issues and seeking the support of lawyers. With the entry into force of the new criminal procedure code (in August), the Lenca defenders of La Paz are being criminalized. This is the case of Víctor Vásquez, who is currently in pre-trial detention. You can be thrown into jail merely for going out to protest.

The criminalization of human rights defenders through the misuse of criminal law has a devastating effect on us and also affects our families and communities. The OHCHR (Office of the United Nations High Commissioner for Human Rights of Honduras has ratified the requests of our reports and has reiterated the need for compliance with the guarantees of “due process” and has requested the courts to review precautionary measures and prevent excessive use of pre-trial detention procedures.

The situation is worsening. Harassment and threats are the same as ever – even worse. This December, Felix Vázques, an indigenous leader and environmentalist, was assassinated – at his home in front of his children. He was the coordinator of the UTC (Union of Field Workers) who are part of our team and a group of local organizations that we have brought together in order to create opposition strategies. These murders want to put fear into our hearts, and the truth is that it has lowered participation numbers in the movement.

I’d like to take this opportunity to say that with COVID, deprivation for many of those who do not have health care has worsened and children are being left “without the bread of knowledge” due to the pandemic. The government, meanwhile, is saying that it will invest in running hospitals, but this is not true. There is too much corruption.

During the period between the pandemic and the hurricanes ETA and IOTA, which devastated the Valley of Sula, President Juan Orlando Hernandez and his deputies created new laws that involve the construction of 14 hydroelectric dams that, they state, will prevent floods from ever happening again in the country.

> Which are the main challenges that Human Rights defenders face in your territory?

Mainly threats, discrimination and fear of dying like Berta. We are unprotected and criminalised, excluded from social projects. As women, we also face the consequences of a system that is patriarchal in all its areas (political, social, economic and cultural).

Yes, the population of Roatán, on the Bahia Islands, are on the alert after the establishment of the first “Employment and Development Zone” (ZEDE), in the island region which will allegedly aid job creation and strengthen the economy with over $500 million in foreign investment.

It is one of the greatest follies of this president, who has handed over the islands (which are unique and a world reserve, with coral reefs) and sold them to foreigners. And it’s because of these struggles that some of our colleagues are missing, such as the 5 Garifunas (ethnic group), who were community leaders and of whom we have known nothing for a year. And as with this case, many other murders have been committed. And no justice has been done.

> The UN special rapporteur on the situation of Human Rights defenders visited Honduras in spring.

Yes, Michel Frost was here in La Paz with us. He could sense our reality and the impact of the actions of this de facto government on indigenous communities impoverished by neoliberal measures, ungovernability and the criminalisation of social protesting. He learnt about deaths by the military police, feminicides, missing persons and people imprisoned and indicted… or murdered, for defending the land.

The forest is being destroyed in the communities of the La Paz Region, mainly in Maracala, where complete species are being wiped out. Logging and deforestation continue, and environmental destruction is polluting the waters, destroying the land, and this is behind an increase in respiratory diseases.