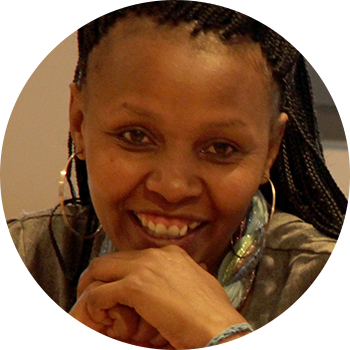 Kenyan human rights activist and a strong advocate for the rights of women, especially women living in situations of vulnerability to the marginal neighborhoods of Nairobi. Ruth was born and continues living in Kiamaiko, located in Mathare, the second largest suburb of Nairobi. Founder and current coordinator of “Bunge la wamama mashinani” (Women’s Parliament), a popular movement that carries out campaigns for social justice and accountability in different parts of Kenya. This movement also gives voice to women, informs them of their rights and struggle to improve the conditions of work, especially, of domestic employees; It promotes better access to health and, above all, seeks to guarantee the reproductive rights of women, as well as to promote education and facilitate access to justice. She is the driving force behind Warembo Ni Yes, young women’s movement to support the new constitution of Kenya and promote the rights guaranteed by the Constitution.

Because of her activism, Ruth Mumbi suffers intimidation and threats and has been arrested and beaten by the Kenyan police and accused of “incitement to violence” in 2011 as a result of her participation in a peaceful demonstration in protest of the high number of the deaths of pregnant women in the maternity ward of Huruma, one of the largest suburbs in Nairobi located at Mathare.

In 2014, she was one of the 6 finalists from among the 90 candidates for the 2013 At-Risk Human Rights Defenders Award from the Frontline Defenders organization, and was awarded a scholarship by the Human Rights Center of the University of York.

> What kinds of challenges do you face personally as a human rights defender, as a woman and as a resident of Kiamaiko?

As a human rights defender and as a woman living in an urban settlement where the majority live in conditions of extreme poverty, and in an area where different cultural practices that place women as second-class citizens coexist, they expect from me to remain sited watching while men make decisions. As a woman who defies the status quo, I have been socially rejected, stigmatized, sexually assaulted by the authorities to demand a fair tax system, unfairly prosecuted and discriminated against on ethnic grounds. For me it is a great challenge that the community has high expectations when the problems they face are solved and try to satisfy all their needs, to the point that I am forced to use personal resources. Despite this, resources remain insufficient to meet these needs. It is often difficult to find the balance between the dual responsibilities of being a single mother and a community organizer.

> What is the situation of women in Nairobi’s urban settlements? What are the most urgent needs for these women and the most frequent human rights violations?

Women in the urban settlements of Nairobi continue living in conditions of extreme poverty, a fact that places them in a vulnerable position towards gender-based violence both at the family level and at the society level, added to the historical injustices of the different regimes. Many women in these neighbourhoods are denied education and forced by parents or other relatives to marry young to obtain the benefits of dowry.

Rape and dishonour continue to be a great threat to women and girls living in the settlements, facts that are accentuated by the physical characteristics of the neighbourhood such as narrow alleys, open drains and areas without lighting, all this form a fertile ground for rapes and muggings. On the other hand, domestic violence against women is flagrant in these areas.

> Why did you decide to found Bunge La Wamama Mashinani (the women’s parliament)?

We wanted to create a space for women in urban settlements, who were deprived of their rights, so that in this way they could participate and share the experiences and challenges they had to face. The movement was born after the presidential elections, which unleashed waves of violence affecting the entire country, especially women and children. The country was divided by ethnic groups and in this context BLWM became a platform for reconciliation, since it united the warring communities promoting peaceful coexistence between the different ethnic groups residing in the area.

> What kinds of changes have these movements brought about in your community and in Kenyan society?

The changes these movements have achieved are the fact that they have created a great force and unite the voices of women from different regions of the country. Now women are much more aware of their rights than before.

Yes. We have not stopped reporting the death of Stephen Gichuru, my brother-in-law, at the hands of the police. Chris Ndwiga, aged 17 also died from shots fired by Kiamaiko police officers. That is why we have called on the President of Kenya, Uhunu Kenyatta, to open an immediate and impartial investigation into the cases of Stephen Gichuru and other young people who have died at the hands of the Kiamaiko police and we have demanded that those responsible for these deaths be brought to justice. We also urge that those measures necessary be taken, so that in the future there are no cases of extrajudicial execution or any excessive use of force by the Kenyan police forces.

> The killings and the evictions have continued during the pandemic

There were many cases of Covid in Kenya last year, we were confined. Yet innocent civilians continued to die at the hands of the police. The most shocking case was during the eviction of a family in Karobangi. They had all the legal documentation they needed to live there, but at three o’clock in the morning tractors came and started demolishing the houses. How can people be evicted from their homes in the midst of a pandemic? The government asked us to stay home and what it did was take advantage of the situation in order to evict elderly women and children from their houses. This is a crime against humanity. People are losing their jobs and their houses and the government is acting with impunity. In times of a pandemic, when we don’t know what will happen tomorrow, the government makes you homeless instead of helping you.

I wanted everyone to know what was going on and I called a human rights activist who has a lot of followers on Twitter, and he was streaming. His video was trending here. At least we were able to show it to the world. I want a country that respects human rights. International solidarity helps us break the government’s narrative of accusing us of things we haven’t done, while it murders our families and evicts vulnerable people.