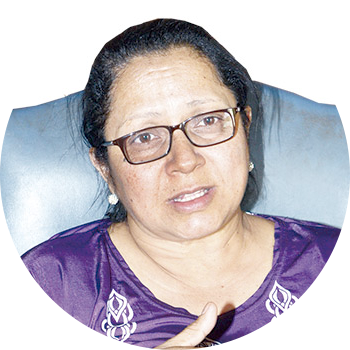 Sandra Zambrano is a human rights lawyer in the “Asociación para una Vida Mejor de Personas Infectadas y Afectadas por el VIH-SIDA en Honduras” (APUVIMEH). APUVIMEH, born in 2004, works with the community of lesbian, gay, bisexual, transgender and intersex as well as HIV/AIDS affected in Honduras. It also manages a shelter for LGBTI people with HIV/AIDS, the “Casa Renacer” and other projects, including a program for the prevention of HIV/AIDS and sexual infections and a project for young gay people.

In the late 90s, Sandra Zambrano discovered that one of his brothers, Juan de Dios, was living the final stages of AIDS. The family did not detect the infection until it was very advanced, and it was then when Sandra saw how discrimination works. His brother had a drinking problem, but he had never been fired from work for it. However, the dismissal came when it was known that he had AIDS. He, however, was not silent and reported the case to the media.

“We started fighting and we were not alone, even though there were many myths and legends”, Sandra recalled in an interview last year. Later, another brother of the activist, José Zambrano, began to get involved in defending the rights of lesbian, gay, transgender, bisexual and intersex (LGTBI). Many José colleagues were infected with HIV, and this made both brothers start working on the reception of people suffering from AIDS.

The activity as a defender of human rights has brought Sandra to suffer numerous threats and intimidations. Also, her environment has been attacked. Sandra’s daughter was kidnapped for several hours in 2013, and this year have left the country two of her nephews for security reasons. Another nephew, Allan Yoni Banegas Godoy, was kidnapped on last 13 May and later killed. APUVIMEH has since 2013 a precautionary measure of the Inter-American Commission on Human Rights (IACHR); in July 2015, it was requested the extension.