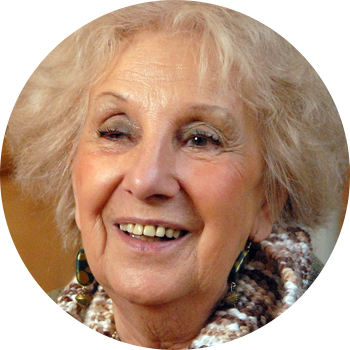 She is an Argentine activist advocating human rights. In August 1977, the army captured and tortured her husband who was released after paying a bailout. At the end of 1977, they kidnapped one of their daughters who was pregnant for 3 months, kept alive until childbirth. Finally, her daughter’s corpse was returned and her grandson is still missing. In 1977, the association “Abuelas de Plaza de Mayo” was formed, of which Estela is the president. “Abuelas de Plaza de Mayo” has achieved the location and restitution of their legitimate families to 107 kidnapped children – disappeared by the dictatorship.

In March 2016, 40 years of the coup that gave rise to the Argentine dictatorship of Jorge Rafael Videla were fulfilled. Estela de Carlotto explained in an interview that every March 24 “is a symbolic date” but that for the organization “every day is to recover history and achieve justice.” Despite having found her grandson in August 2014, De Carlotto continues to lead Abuelas de Plaza de Mayo, organization where militates since 1978. Argentine military dictatorship between 1976 and 1983.