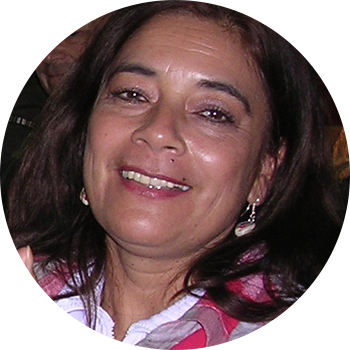 Colombian defender of human rights. She is a member of the “Comisión de Derechos Humanos y Derecho Internacional del Bajo Ari Ari”. Due to her work denouncing the grave violations of human rights and crimes against humanity committed in this region, she has suffered threats from paramilitary groups that led her, along with her family, to have to flee on several occasions and leave home and land where they worked as farmers. The threats and attacks have not only been to her person but also to her children, one of whom was shot with 17 years old. Between August 2010 and February 2011, she came to Sant Boi de Llobregat, hosted by the Program for the Protection of Human Rights Defenders of the “Oficina de Promoció de la Pau i els Drets Humans de la Generalitat de Catalunya”.

Due to persistent threats, she was hosted in Bilbao during the second half of 2015, within the framework of the Basque Temporary Protection Program for human rights defenders. Now, Rivera explains that the security situation is “terrible”, and she fears both her life and the life of her fellow fighters and her family. She is the general secretary of the “Asociación Nacional de Zona de Reserva Campesina” (ANZORC), an entity that has been pointed out by the government, the military forces and the paramilitary. Also participating in the organizations “Marcha Patriótica”, “Fundación por la Defensa de los Derechos Humanos” and the “DIH del Oriente y Centro de Colombia” (DHOC).