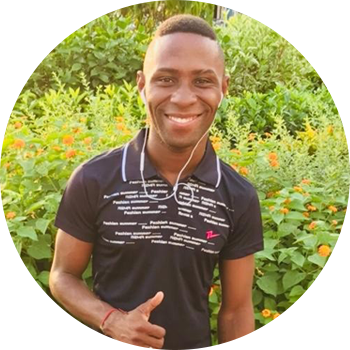 Rentería is a Colombian activist who works on reinforcing the communities of African descent in Buenaventura. He is a poet and a rapper, and a university psychology student. The organization Historias en kilómetros is training him in cinema and audiovisual production to contribute to uncover the truth about the Peace Agreements.

He participated in various social and community initiatives but is currently focused on the Eleggua Comunicaciones project, which he created and directs. In the words of the artist himself, this organization seeks to “visibilize realities and strive towards a collective transformation of the territory.”

He also participates in discussions as part of the committee of Paro Civico – a civil movement in 2017 which lead to a powerful protest of 22 days – and in the Social Political Council of his municipality. Through the RCN Radio, he analyses news and facts linked to corruption in Buenaventura, and since November has a section denouncing corruption in the local Fin de Semana Noticias (Weekend News).

Since he was a child, Rentería has personally witnessed the impact of violence. In the 1990s, his family had to abandon their home and relocate because of violence unfolding in their neighborhood. They later returned, because they had no other place to go. In 2014, the activist was obliged once more to relocate.

While participating in a local youth organization’s meeting with the UNHCR – who was giving them funding – an armed group came to rob the money destined to pay for young people’s transport. Following this incident, the armed group appeared at Rentería’s home and issued death threats to him and his family. These constant threats lead them to leave their neighborhood again. The Colombian state gave Rentería a mobile phone, a bullet-proof vest, and money for relocation, however, the activist confirms that “the lack of guarantees” made him return to his city.

On the 9th of November 2015, while he and his brother-in-law were preparing documents to participate in the Bogotá Park Hip Hop Festival, Rentería witnessed an another attack from an armed group. They entered his house, dragged out his brother-in-law, and assassinated him. After this, the family moved to Cali, where they lived in a refuge home for displaced people. In 2016, Rentería decided to return to Buenaventura to continue his activism; he did so alone, leaving his family behind for security reasons. That year, Rentería made a speech about peace in an event organized by the Democratic Center (political party of the former Colombian President Álvaro Uribe) as part of the plebiscite campaign on the Peace Accords. Once again, he started suffering persecutions and receiving death threats. The state assigned him an armored vehicle and two escorts, that accompany him till this day.

> Where did your social awareness come from?

It came as a response to my reality. I rebelled, as a kid and as an adult – with certain aggressivity at times – in a context where my dad was violent towards my mother. I began participating in youth group organizations; I wanted to be useful to society and surpass the reality of the violence that my mother was living at that moment. Then I ended up becoming member and founder of the Foundation Rostros y Huellas, where I strengthened myself and began to participate in the national level. As I learned more, I became more empowered to defend my rights and those of my excluded and stigmatized community.

> How does your trajectory as a rapper connect with your work in defending human rights?

At first, I wrote poetry, I wrote about my experiences. But from there I went on to rap because I discovered that rap was a fundamental tool to spread the messages I wanted to convey, and to defend in a broader way my rights and those of my people. I saw the communicative force that rap carries, and that I could take advantage of the radio and television programs which invited me to spread my message. And so, under the excuse of rap, I could enter all the neighborhoods to deliver a message of liberation; these are words that I couldn’t take to certain places otherwise – where addressing certain topics would be equivalent to making a death-wish.

> In 2016 you starred in a viral video in which you criticized former president Álvaro Uribe’s campaign against the Peace Accords. How did you feel about the outcome?

For me, it was a great opportunity. As a victim, I supported forgiveness and reconciliation, in spite of everything that happened to me and to my family. It saddened me to see how we lost the vote, but I felt proud because 70% of my city voted for it. This made me see the ability that we, the victims of my city, have for forgiveness.

> In your work defending human rights, you focus on poverty, inequality, and racism.

Buenaventura is majoritarily a city of black people, and progress here is very slow. Where there are ethnic communities there is poverty, abandonment, violence, and inequality. And this country treats its inhabitants in a stratified manner: a black man is worth very little, and even less if he is poor. The condemnation to poverty causes ethnic communities to become violent and makes them vote for people who promise a change for the better, even if these people end up taking advantage of our current situation.

> What are the main challenges that youth face in Buenaventura?

The main challenge is to stay alive in the midst so much violence. But it is also a challenge to maintain hope in an environment with so few opportunities and to abstain from violence when there is so much misery. It’s difficult to survive in a city with 63% unemployment and 80% of the population living in poverty. It’s painful to see so many young people leave their country to seek better conditions elsewhere. It’s very difficult to be young in Buenaventura when state neglect and local corruption dominate everything. But it’s up to us to resist, it’s the weapon we have left.

> You are currently studying Psychology.

It is important for me to have access to a university qualification, because it will allow me to break the family chain of illiteracy, and to become the first professional amongst my siblings, although I am the youngest. University studies will help me reinforce activities that support my community, and to become a reference for permanent motivation in the territory. By leading by example, I can show that it’s possible to transform the reality of impoverishment.