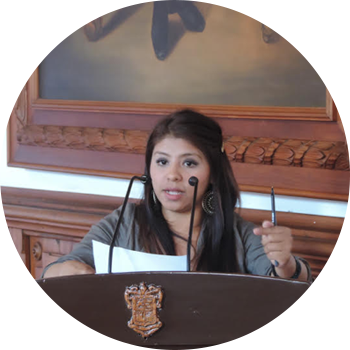 The life of Janahuy Paredes changed radically on the 26 September 2007. It was the day his father, José Francisco Paredes Ruiz, was made to disappear near Morelia, in the Michoacán State, under circumstances still unknown today. Francisco Paredes was a member of the Fundación Diego Lucero, a grassroots organisation that worked for the promotion and defence of Human Rights and that specialised on reporting forced disappearances in Mexico.

Due to the disappearance of Francisco Paredes Ruiz, Janahuy, who was 23 years old at the time and studying a degree on cinematography, became a Human Rights defender herself. Together with her sister Cristina and her brother Francisco, she launched a campaign to demand the Mexican State that his father was returned alive. In her struggles she was supported by other members of the Fundación Diego Lucero and the Liga Mexicana para los Derechos Humanos.

In 2009 both Janahuy and her sister started providing support for the families of disappeared people in Michoacán State.

Little by Little, the activist gained experience, getting to know and understand the processes of memory, truth and justice for victims of forced disappearances.

In 2012 the Comité de Familiares de Personas Detenidas Desaparecidas en México (Cofaddem – Alzando Voces) was formalised as an organisation, having been founded in 2009 by the Paredes sisters and other activists. Since then, as Janahuy tells us, Cofaddem “has grown together with the political development of organizational processes”.

The Paredes family, and especially Janahuy, have been the targets of many attacks and aggressions, often by the hand of actors linked to public institutions. The last serious attempt against her physical and psychological integrity happened last February, when personnel from the Mando Único Policial, which answers to the federal government, assaulted Francisco Paredes Ruiz’s house violently and without any warrant.

> It’s been more than 10 years since your father disappeared. What have the Mexican authorities done?

The only thing they ever did, during the first three years, was to emulate an investigation. They were happy following unreliable sources, with little grounds, and did not pursue any of the lines of investigation that we pointed to from the family.

The day my father was taken, 30 meters from where it happened, there was a local police station. 50 meters from there, a federal police station, 10 meters away a Mexican army convoy, and there were cameras in the area controlled by the Michoacán State authorities. All these possible lines of investigation were disregarded, denied or supressed. At the same time, the harassing and threats from different police forces to our physical and psychological integrity increased, both to my family and my father’s colleagues.

> How do you explain the high levels of violence by the Mexican State?

The violence inflicted by the Mexican State is due to economic reasons. They use terror as a social control tool, to erase any social opposition and subject the population to a state of paralysis. Since the Joint Operation Michoacán started, human rights violations by military and police forces have increased. Also, there have been summary and extra judiciary executions, torture, arbitrary arrests, illegal searches, forced displacements and, above all, because of their extreme cruelty, forced disappearances of people. This terror scenario has allowed the state to supress, behind the apparent confrontation between communities, a strategy of social control through fear. The goal is to allow the exploitation of the State’s natural resources and be able to pass macro projects of transnational companies, like tourist development or modernization by foreign investors.

> You and your family have been harassed by the State in your struggle to know what happened to your father.
Since his disappearance we have been subject to threats and harassment by all the bodies of government (local, state and federal), and it increased when we started supporting other victims and formalised the organisation.

We have been sheltered by grassroots and human rights organisations that have allowed us to reduce the vulnerability we were facing.

> Could you share a positive aspect of this path?

The absence of my father and everything that has brought in me his disappearance –pain, anxiety, fear, unjustified guilt, the intention of breaking with my father’s and my personal projects – have led me to develop politically to find answers. With time, I have strengthened my ability to react in front of forced disappearances. On the one hand I have been able to organise to know what we are facing as victim’s families. On the other hand, I have fostered self-care, in the most holistic way I can afford, to prioritise my human dignity in this fight. The disappearance of my father did not break my life, did not put it into hold, it just gave me another way of life, being more conscious in my acts, for me, for my family and my life companions.

> In the end of 2017, Mexico passed a general law about disappearances.

The law was not passed as we had been working from the very beginning, in line with international standards. The executive representative and his team made many last minute changes, breaking the national agreements they had reached with families. There were finally many gaps that allow for impunity in many cases of forced disappearance.

Yet, there were meaningful changes beyond technical expectations. The law strengthened collective action and alternative forms of organisation and gave us hope for human dignity. Also, the Mexican state recognised publically that forced disappearances happen. It is a first step in the fight for justice; there is a small hope to make ‘never more’ possible.

I want to know more! (in Catalan)